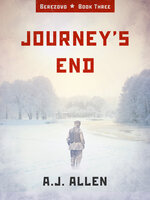 Russia, 1907. The revolution has failed.
The small Siberian town of Berezovo now plays host to a group of political prisoners, and the armed police who are taking them to exile in a secret location farther north.

Among the prisoners is Leon Trotsky, whose escape to freedom may be possible if only he can bring some locals on board to assist. Meanwhile, Yeliena, the doctor's wife, and Anton, his assistant, try to avoid each other and their forbidden feelings as the village play reaches performance night; and the women of the town plot the downfall of one who has strayed from their societal standards.

As the convoy leaves Berezovo for its final destination, Trotsky engineers a reason to stay behind, the chance of freedom within his grasp.

Journey’s End is the third in a series of novels about Berezovo. It contains a cast of memorable and intricately crafted characters who together populate a story of epic scope, reminiscent of the Russian classics of old, but which revels in the fine details of life, love, gossip, politics and intrigue.