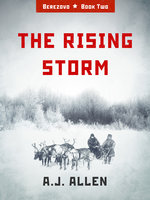 Russia, 1907. The revolution has failed.
Leon Trotsky is one of a group of political prisoners being escorted by armed police, in a convoy of horse-drawn sleighs, to a secret location in the icy north of the country. Here they will be exiled as political prisoners. If, that is, they survive the journey.

Meanwhile, in the small Siberian town of Berezovo, many dramas are unfolding. The doctor’s assistant attempts to navigate his new-found feelings for his boss’s wife under the watchful eyes of the town’s gossip-mongers. The police and the town council are awaiting with trepidation the impending arrival of the exiles. And, in the dark passageways of the Jewish Quarter, whispered arguments are rife over how best to receive their once-admired leaders.

As the convoy nears its destination, the lives of the prisoners and townsfolk are on a collision course that will make history.

The Rising Storm is the second in a series of novels about Berezovo. It contains a cast of memorable and intricately crafted characters who together populate a story of epic scope, reminiscent of the Russian classics of old, but which revels in the fine details of life, love, gossip, politics and intrigue. It is a striking debut from a significant new voice in fiction.