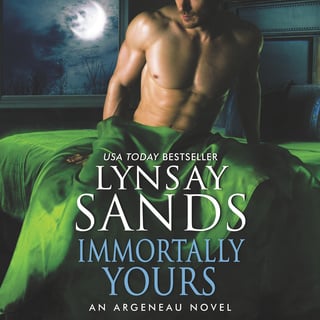 One hundred and twenty-five years is a long time to nurse a crush. That’s how long it’s been since Beth Argenis first met Cullen “Scotty” MacDonald and he instantly became the star of her most X-rated dreams. Back then, he was rescuing her from a Rogue Immortal. Now Beth’s a Rogue Hunter—a damn good one. She doesn’t need saving anymore, despite what Scotty thinks. What she does need is the fierce, wild desire that finally erupts between them.

Scotty has hesitated to claim Beth as his own. But one explosive kiss confirms what he’s long suspected: She’s his life mate. But Beth is tough, fearless, beautiful…and in immortal danger. Unless he wants to lose her forever, he’ll have to rethink everything he once believed about love and destiny as well as confront an enemy who’s terrifyingly close.
Meiri upplýsingar um hljóðbókina:
Útgefandi: HarperAudio
Útgefið: 2017-09-26
ISBN: 9780062699640
10Klst. 38Mín
enska
4,12
Flokkur: Ástarsögur
Seríur: Argeneau: 26
Thriller Hryllingur Dulrænar ástarsögur

Ella and the Beast

Knock Down Dragon Out

The Billion-were Needs A Mate

Finding the Fire Within