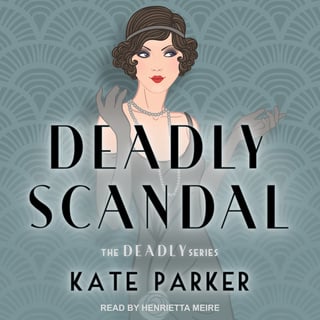 Höfundur: Kate Parker
Lesari: Henrietta Meire
Snið: Hljóðbók
8Klst. 12Mín
enska
4
Olivia Denis is a content young wife with a carefree life in late 1930s London. Then her world is shattered with the violent death of her husband, Reggie. The police want to call it a suicide and close the case, but Olivia knows Reggie couldn't possibly have fired the fatal shot.
Further mysteries surface surrounding her husband's death. Did the trustworthy Foreign Office employee betray government secrets? Was his murder linked to the death of a German embassy clerk the same night? And who searched their flat?

Her desire for answers and her need to support herself cause her to break away from the pampered life she's known and take a job. But with the much-needed paycheck as a society reporter for a newspaper comes a secret secondary assignment-one that involves her in the increasingly dangerous world of European politics as the continent slides toward war.
Meiri upplýsingar um hljóðbókina:
Útgefandi: Tantor Audio
Útgefið: 2017-03-28
ISBN: 9781541470439
8Klst. 12Mín
enska
4
Flokkur: Glæpasögur
Seríur: The Deadly Series: 1
Flóknir söguþræðir Mjúkar glæpasögur Glæpasaga Sögulegar glæpasögur