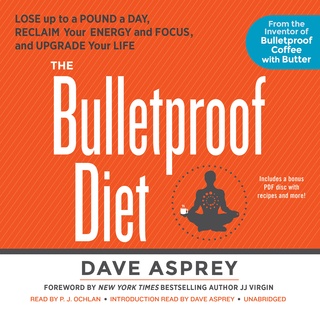 Höfundur: Dave Asprey
Lesari: P.J. Ochlan
Snið: Hljóðbók
9Klst. 19Mín
enska
4,22
In his mid-twenties, Dave Asprey was a successful Silicon Valley multimillionaire. He also weighed three hundred pounds, despite the fact that he was doing what doctors recommended: eating 1,800 calories a day and working out ninety minutes a day, six times a week.

When his excess fat started causing brain fog and food cravings sapped his energy and willpower, Asprey turned to the same hacking techniques that made his fortune to “hack” his own biology, investing more than $300,000 and fifteen years to uncover what was hindering his energy, performance, appearance, and happiness.

TheBulletproof Diet will change what you think you know about weight loss and wellness. You will skip breakfast, stop counting calories, eat a high-fat diet, work out and sleepless, and handle stress with ease. By ditching traditional “diet” thinking, Asprey has maintained a one hundred-pound weight loss, increased his IQ, and reached a level of health that seemed unattainable. His forties are truly better than his twenties, and The Bulletproof Diet brings his best hacks to the masses.
Meiri upplýsingar um hljóðbókina:
Útgefandi: Blackstone Publishing
Útgefið: 2014-12-02
ISBN: 9781481503662
9Klst. 19Mín
enska
4,22
Flokkur: Sjálfsrækt
Matarræði og næring

How Not To Die: Discover the foods scientifically proven to prevent and reverse disease

How Not To Diet

The Plant Paradox Quick and Easy

Keto Diet for Beginners: Your Step By Step Guide to Living the Keto Lifestyle

The Plant Paradox: The Hidden Dangers in 'Healthy' Foods That Cause Disease and Weight Gain

Life in the Fasting Lane: How to Make Intermittent Fasting a Lifestyle—and Reap the Benefits of Weight Loss and Better Health

Ketogenic Diet and Intermittent Fasting for Beginners: A Complete Guide to the Keto Fasting Lifestyle

Primal Fat Burner: Live Longer, Slow Aging, Super-Power Your Brain, and Save Your Life with a High-Fat, Low-Carb Paleo