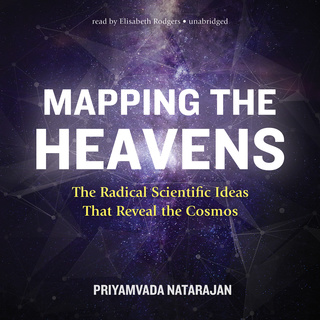 Höfundur: Priyamvada Natarajan
Lesari: Elisabeth Rodgers
Snið: Sem hljóðbók
8Klst. 27Mín
enska
4,27
Mapping the Heavens provides a tour of the “greatest hits” of cosmological discoveries—the ideas that reshaped our universe over the past century. The cosmos, once understood as a stagnant place filled with the ordinary, is now a universe that is expanding at an accelerating pace, propelled by dark energy and structured by dark matter. Priyamvada Natarajan, our guide to these ideas, is at the forefront of the research—an astrophysicist who literally creates maps of invisible matter in the universe. She not only explains for a wide audience the science behind these essential ideas but also provides an understanding of how radical scientific theories gain acceptance.

The formation and growth of black holes, dark matter halos, the accelerating expansion of the universe, the echo of the big bang, the discovery of exoplanets, and the possibility of other universes—these are some of the puzzling cosmological topics of the early twenty-first century. Natarajan discusses why the acceptance of new ideas about the universe and our place in it has never been linear and always contested even within the scientific community. And she affirms that, shifting and incomplete as science always must be, it offers the best path we have toward making sense of our wondrous, mysterious universe.
Meiri upplýsingar um hljóðbókina:
Útgefandi: Blackstone Publishing
Útgefið: 2016-04-26
ISBN: 9781504718479
8Klst. 27Mín
enska
4,27
Flokkur: Almennar bækur

Calculating the Cosmos: How Mathematics Unveils the Universe

How the Universe Got Its Spots