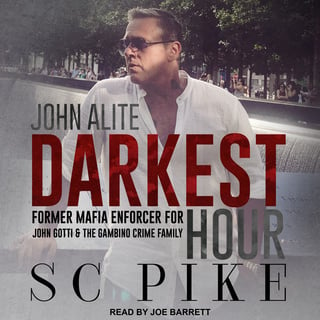 Höfundur: S.C. Pike
Lesari: Joe Barrett
Snið: Sem hljóðbók
5Klst. 44Mín
enska
3,17
A college baseball scholarship was his way out of the inner city, but his dreams of going pro were crushed by an arm injury. John Alite was forced to return home to the only life he knew, where having to live on the streets of New York meant one thing-earning how to survive. He was driven. He was extreme. He was feared. But most of all, he was loyal.
From a young age, he found himself influenced by the wrong crowd. Enticed by the wealth, power, and prestige of the mafia, he immersed himself in a world that was foreign to most. A society where policies were enforced by instilling fear. Honor and loyalty were merely a misnomer. The cold, bitter truth was, he was expendable, and his sworn allegiance was rewarded with betrayal.

On the run and unable to trust anyone, John was finally forced to confront his own demon-himself. Facing the harsh realities of who he was and what he had done wasn't pretty, and he had some serious, life-altering decisions to make. Ones that would come with a price. Through a life of heartache, betrayal, and loss comes a story of grace, healing, and redemption.
Meiri upplýsingar um hljóðbókina:
Útgefandi: Tantor Audio
Útgefið: 2018-12-25
ISBN: 9781977333476
5Klst. 44Mín
enska
3,17
Flokkur: Ævisögur
Sannir glæpir Skipulögð glæpastarfsemi

Marching Powder: A True Story of a British Drug Smuggler In a Bolivian Jail

Drug Lord: The True Story of Pablo Acosta; The Life and Death of a Mexican Kingpin