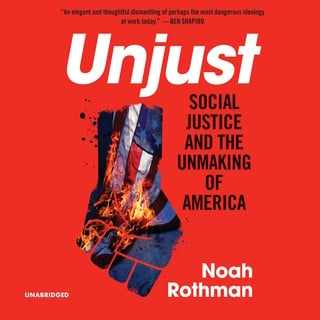 Unjust: Social Justice and the Unmaking of America

Unjust: Social Justice and the Unmaking of America

Unfortunately, social justice has permeated America; and as it turns out, it is not a philosophy that appeals to the better angels of our nature. In practice, social justice is outright disdainful of the kind of blind, objective justice toward which Western civilization has striven since there was such a thing as Western civilization. Its advocates would argue that blind justice is not justice at all and that objectivity is a utopian objective, a myth clung to by naïve children.

The social justice creed is shaping our every daily interaction. It influences how businesses structure themselves. It is altering how employers and employees interrelate. It has utterly transformed academia. It is remaking our politics with alarming swiftness. And there are consequences for those who transgress against the tenets of social justice and the self-appointed inquisitors who enforce its maxims.

The Politically Incorrect Guide to Immigration

The Tyranny of Virtue: Identity, the Academy, and the Hunt for Political Heresies

Ship of Fools: How a Selfish Ruling Class Is Bringing America to the Brink of Revolution

The Once and Future Liberal

The Great Alignment: Race, Party Transformation, and the Rise of Donald Trump

Why Cities Lose: The Deep Roots of the Urban-Rural Political Divide

Unfreedom of the Press

Hate Inc. – Why Today's Media Makes Us Despise One Another

The Branding of Right-Wing Activism: The News Media and the Tea Party