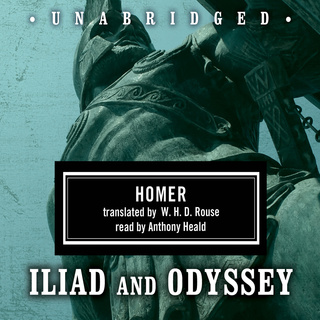 Höfundur: Homer
Lesari: Anthony Heald
Snið: Hljóðbók
13Klst. 34Mín
enska
3,61
Homer’s Iliad can justly be called the world’s greatest war epic. The terrible and long-drawn-out siege of Troy remains one of the classic campaigns, the heroism and treachery of its combatants unmatched in song and story. Driven by fierce passions and loyalties, men and gods battle to a devastating conclusion.

“Homer is full of merriment, full of open fun and delicate comedy, even farce—as when Ares, wounded, bursts up to Olympus like a bomb. And the divine family! What a delightful natural party: human beings raised a degree or two, but all the same, funnier than that. They are the comic background for the tragedy below—for the story of Achilles is a tragedy—the fiery conflict of a man divided against himself, who in a few short days drops to the lowest hell of savagery, then rises to self-mastery and inward peace.”—W.H.D. Rouse
Þýðandi: W.H.D. Rouse
Meiri upplýsingar um hljóðbókina:
Útgefandi: Blackstone Publishing
Útgefið: 2008-09-30
ISBN: 9781483089829
13Klst. 34Mín
enska
3,61
Flokkur: Klassískar bókmenntir
Sígildar sögulegar bókmenntir Gilmore Girls Hefnd #BowieBookClub