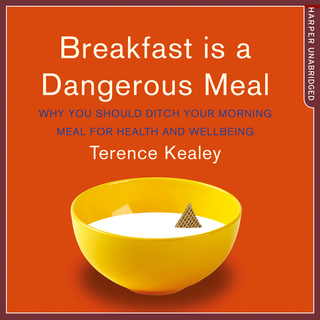 Breakfast is a Dangerous Meal

Breakfast is a Dangerous Meal

Höfundur: Terence Kealey
Lesari: Gordon Griffin
Snið: Sem hljóðbók
9Klst. 13Mín
enska
3,67
Breakfast may be the most important meal of the day, but only if we skip it.


Since Victorian times, we have been told to breakfast like kings and dine like paupers. In the wake of his own type 2 diabetes diagnosis, Professor Terence Kealey was given the same advice. He soon noticed that his glucose levels were unusually high after eating first thing in the morning. But if he continued to fast until lunchtime they fell to a normal level. Professor Kealey began to question how much evidence there was to support the advice he’d been given, and whether there might be an advantage for some to not eating breakfast after all.

Breakfast is a Dangerous Meal asks:

• What is the reliable scientific and medical evidence for eating breakfast?

• Why do people suppose that eating breakfast reduces the total amount of food they consume over the day, when the opposite is true?

• Who should consider intermittent fasting by removing breakfast from their daily routine?

Burn the Fat, Feed the Muscle

How Not To Diet

The Big Fat Surprise: Why Butter, Meat and Cheese Belong in a Healthy Diet

This Is Not A Diet Book

Things No One Will Tell Fat Girls

A Gut Feeling: Conquer Your Sweet Tooth by Tuning Into Your Microbiome

The Starch Solution: Eat the Foods You Love, Regain Your Health, and Lose the Weight for Good!

Lose Weight without Discipline or Willpower: Food Cravings Are the Reasons We Cheat On Our Diet