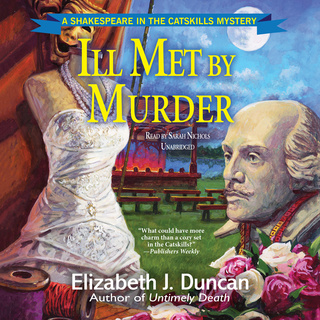 Höfundur: Elizabeth J. Duncan
Lesari: Sarah Nichols
Snið: Sem hljóðbók
5Klst. 57Mín
enska
3,97
It’s the most important night of the year for the Catskills Shakespeare Theater Company: the annual fund-raising performance at the country estate of the wealthy widow Paula Van Dusen. And this year promises to be even more special as the company will give a moonlight performance of A Midsummer Night’s Dream as part of the wedding celebrations for Paula’s daughter, Belinda, and her fiancé Adrian. But “the course of true love never did run smooth,” and in the wake of a disastrous after-party, the stage is set for murder.

Hugh Hedley, son of a prominent upstate New York family and Adrian’s rival in the cutthroat world of high-end Manhattan real estate, is found murdered with a prop stolen from the play. Mrs. Van Dusen is desperate to keep her daughter’s name out of the paper, and so Charlotte Fairfax is drawn into a murder case amid her costume-design responsibilities and finding a home for the company’s new theater school.

Charlotte nevertheless throws herself into an investigation of shady business deals, a missing dog, and long-buried family secrets because “though she be but little, she is fierce!”
Meiri upplýsingar um hljóðbókina:
Útgefandi: Blackstone Publishing
Útgefið: 2016-12-13
ISBN: 9781504797955
5Klst. 57Mín
enska
3,97
Flokkur: Glæpasögur
Seríur: Shakespeare in the Catskills: 2
Mjúkar glæpasögur Flóknir söguþræðir

A Dash of Death