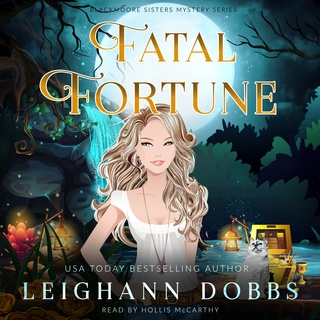 Höfundur: Leighann Dobbs
Lesari: Hollis McCarthy
Snið: Hljóðbók
4Klst. 28Mín
enska
4,08
A cryptic note leads the Blackmoore sisters to a haunted island in the Atlantic Ocean. Many have looked for the treasures reported to be buried there by pirates decades ago, but precious few treasures have been found. And certainly not the powerful energy-infused jewel the Blackmoores are looking for.

Abandoned for decades following several mysterious fatal accidents, the sisters have the island to themselves…or so they think.

Aided by a lonesome pirate ghost, they navigate a maze of tunnels dug into the rocks where they encounter ancient booby-traps, malevolent spirits and natural disasters.

But as they start to zero in on the location of the relic, it becomes clear that they are not alone and whoever else is on the island has no intention of leaving without the relic - even if it means killing the entire Blackmoore clan.
Meiri upplýsingar um hljóðbókina:
Útgefandi: Leighann Dobbs Publishing
Útgefið: 2017-04-07
ISBN: 9781987168297
4Klst. 28Mín
enska
4,08
Flokkur: Glæpasögur
Flóknir söguþræðir Mjúkar glæpasögur