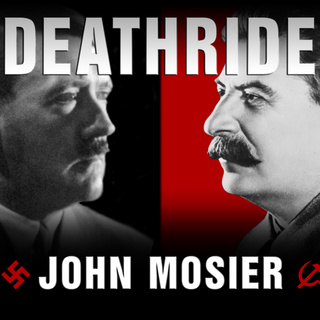 Scritto da: John Mosier
Letto da: Michael Prichard
Formato: Audio & e-book
12H 50Min
Inglese
3,85
John Mosier presents a revisionist retelling of the war on the Eastern Front. Although the Eastern Front was the biggest and most important theater in World War II, it is not well known in the United States, as no American troops participated in the fighting. Yet historians agree that this is where the decisive battles of the war were fought. The conventional wisdom about the Eastern Front is that Hitler was mad to think he could defeat the USSR because of its vast size and population, and that the Battle of Stalingrad marked the turning point of the war. Neither statement is accurate, says Mosier; Hitler came very close to winning outright.

Mosier's history of the Eastern Front will generate considerable controversy both because of his unconventional arguments and because he criticizes historians who have accepted Soviet facts and interpretations. Mosier argues that Soviet accounts are utterly untrustworthy and that accounts relying on them are fantasies. Deathride argues that the war in the East was Hitler's to lose, that Stalin was in grave jeopardy from the outset of the war, and that it was the Allied victories in North Africa and consequent threat to Italy that forced Hitler to change his plans and saved Stalin from near-certain defeat. Stalin's only real triumph was in creating a legend of victory.
Più informazioni
Editore: Tantor Audio
Pubblicato: 2010-06-16
ISBN: 9781400187362
Più informazioni
Editore: Simon & Schuster
Pubblicato: 2010-06-15
ISBN: 9781416577027
12H 50Min
Inglese
3,85
Categoria: Storia
Seconda guerra mondiale Russia

Pearl Harbor: From Infamy to Greatness

The Russian Revolution: History in an Hour

The Last Battle: When U.S. and German Soldiers Joined Forces in the Waning Hours of World War II in Europe