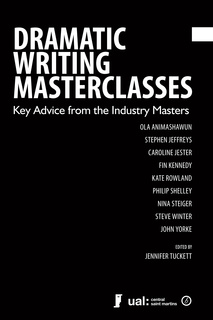 Scritto da: Jennifer Tuckett
Formato: E-book
Inglese
Dramatic Writing Masterclasses: Key Advice from the Industry Masters brings together the advice of the professionals who have led the way in dramatic writing training in the UK. Including

Stephen Jeffreys, Literary Associate at the Royal Court Theatre for eleven years and creator of Masterclasses which have led the way in Playwriting training in the UK

Caroline Jester, who has been Dramaturg at Birmingham Repertory Theatre, co-author of the book Playwriting Across the Curriculum and has pioneered collaborative and digital playwriting programmes worldwide

Fin Kennedy, winner of the first Fringe First award ever awarded to a schools production and co-Artistic Director of Tamasha Theatre Company

John Yo rke, creator of the BBC Writers Academy and former Head of Channel 4 Drama and Controller of BBC Drama Production

Fiction Writing: How To Write Your First Best Selling Novel; A Step By Step Beginner's Guide To Narrative Writer's Craft

Zen in the Art of Writing

The Plot Whisperer: Secrets of Story Structure Any Writer Can Master

The True Secret of Writing: Connecting Life with Language

Help! For Writers: 210 Solutions to the Problems Every Writer Faces

The Art of Dramatic Writing: Its Basis in the Creative Interpretation of Human Motives

How to Write Well

The Writing Revolution: A Guide to Advancing Thinking Through Writing in All Subjects and Grades

The Writing of Fiction

The Art of the Novel

Writing For Beginners: A Step-by-Step To Do List Guide For Writing An Outstanding Fiction Novel With Proven Easy Steps

How to be a Writer

How to Write a Novel