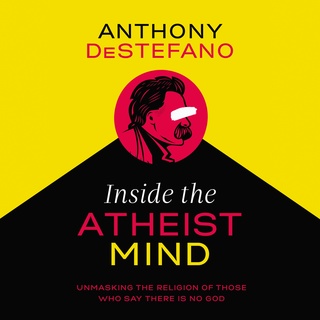 A witty and devastating takedown of the "new" atheist position, Inside the Atheist Mind debunks the theories of Richard Dawkins, Christopher Hitchens, Sam Harris, and others, revealing how inconsistent, illogical, and frankly ludicrous their conclusions truly are. Poking fun at atheists in a clever and intelligent way, Anthony DeStefano demonstrates just how full of holes the new atheism is and reveals that it is actually a "religion" of its own, complete with a creed, a set of commandments, a rigid moral code, and rewards and punishments. More than that, DeStefano exposes that atheism is itself a "superstition" of the worst kind.

The Bible For Dummies

Dying to Meet Jesus: How Encountering Heaven Changed My Life

The Long War against God

Why I Still Believe: A Former Atheist’s Reckoning with the Bad Reputation Christians Give a Good God

Lost and Found: How Jesus helped us discover our true selves

The Path Made Clear: Discovering Your Life's Direction and Purpose

The Complete Infidel's Guide to the Koran

Jesus Among Other Gods

The Forgotten Trinity: Recovering the Heart of Christian Belief

The Lost World of Adam and Eve: Genesis 2-3 and the Human Origins Debate

The Walk: Five Essential Practices of the Christian Life

What’s So Great about Christianity

The End of Reason

God Will Use This for Good: Surviving the Mess of Life