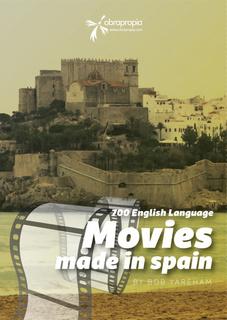 Movies made in Spain

Movies made in Spain

Scritto da: Bob Yareham
Formato: E-book
Inglese
In this book you can discover where Steven Spielberg built a prisoner of war camp in Spain, where Katherine Hepburn's Troy was in Spain, or Audrey Hepburn's Nottingham, in Spain too.

Discover Ridley Scott's Jerusalem in Spain or The Battle of Britain's Berlin. Richard Harris sang about Camelot in Spain, and Terry Gilliam fought a war here, while Al Pacino flew Adam Sandler into a Spanish castle for supper. Patton, Richard III, Spartacus and Cleopatra; they all fought in Spain. This book, the result of ten years work, will tell you where, when and why.
Più informazioni
Editore: Obrapropia
Pubblicato: 2016-06-20
ISBN: 9788416717118
Inglese
Categoria: Non-fiction

The Writings of Paul Frees

The Everything Filmmaking Book: From Script to Premiere -a Complete Guide to Putting Your Vision on the Screen

The Movie Business: The Definitive Guide to the Legal and Financial Secrets of Getting Your Movie Made

150 Movies You Should Die Before You See

The Art of Tattoo

Life's a B*tch and Then You Die