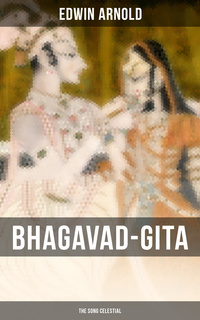 Scritto da: Edwin Arnold
Formato: e-book
Inglese
2,75
The Bhagavad Gita ("Song of the Lord"), often referred to as simply the Gita, is a 700-verse Hindu scripture in Sanskrit that is part of the Hindu epic Mahabharata. The Gita is set in a narrative framework of a dialogue between Pandava prince Arjuna and his guide and charioteer Krishna. Facing the duty as a warrior to fight the Dharma Yudhha or righteous war between Pandavas and Kauravas, Arjuna is counselled by Krishna to "fulfill his Kshatriya (warrior) duty as a warrior and establishing Dharma." The Bhagavad Gita presents a synthesis of the Brahmanical concept of Dharma, theistic bhakti, the yogic ideals of moksha through jnana, bhakti, karma, and Raja Yoga and Samkhya philosophy.

Sir Edwin Arnold (1832 - 1904) was an English poet and journalist. His chief work with this object is The Light of Asia, which was translated into various languages such as Hindi.

"So have I read this wonderful and spirit-thrilling speech,
By Krishna and Prince Arjun held, discoursing each with each;
So have I writ its wisdom here,--its hidden mystery,
For England; O our India! as dear to me as She!" - Edwin Arnold
Più informazioni
Editore: Musaicum Books
Pubblicato: 2017-07-04
ISBN: 9788075837974
Inglese
2,75
Categoria: Religione e Spiritualità
Buddismo Zen

The Art of Living: Peace and Freedom in the Here and Now

The Bhagavad Gita: The Song Celestial

The Ramayana: A New Retelling of Valmiki's Ancient Epic-Complete and Comprehensive

Peace Is Every Step

Eternal Teaching of The Bhagavad Gita - The Song Of God

An Appeal to the World

Timeless Wisdom Of The Vedas: The Story Of Ajamila Deliverence From Death – Book Two

The Bhagavad Gita According to Gandhi (Rediscovered Books)

The Bhagavad Gita According to Gandhi

The Light Of Yoga: Illuminations From The Bhagavata Purana