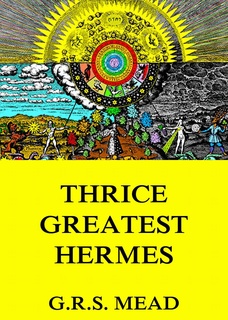 Scritto da: G.R.S. Mead
Formato: E-book
Inglese
4
This is the complete edition including all three books and a detailed essay about Hermeneutics.

The so-called Hermetic writings have been known to Christian writers for many centuries. The early church Fathers (Justin Martyr, Tertullian, Clement of Alexandria) quote them in defense of Christianity. Stobaeus collected fragments of them. The Humanists knew and valued them. They were studied in the sixteenth and seventeenth centuries, and in modern times have again been diligently examined by many scholars. G. R. S. Mead has issued a translation of the whole body of extant literature, with extended prolegomena, commentary, etc. There is a wide difference of opinion as to the date at which this literature was produced. Mead believes that some of the extant portions of it are at least as early as the earliest Christian writings, while von Christ assigns them to the third Christian century, and thinks that they show the influence of neo-Platonism. To affirm that they influenced New Testament usage would be hazardous, but they perhaps throw some light on the direction in which thought was moving in New Testament times.
Più informazioni
Editore: Jazzybee Verlag
Pubblicato: 2013-11-08
ISBN: 9783849632717
Inglese
4
Categoria: Religione e Spiritualità

The Kybalion: The Masterwork of Esoteric Wisdom for Living With Power and Purpose

The Secret Doctrine of the Rosicrucians

The Virgin of the World

Moon Spells: How to Use the Phases of the Moon to Get What You Want

Moon Magic: Your Complete Guide to Harnessing the Mystical Energy of the Moon

The Occult Anatomy of Man

Your Goddess Year: A Week-by-Week Guide to Invoking the Divine Feminine

The Hymns of Hermes

The Kybalion (Condensed Classics): The Masterwork of Esoteric Wisdom for Living with Power and Purpose