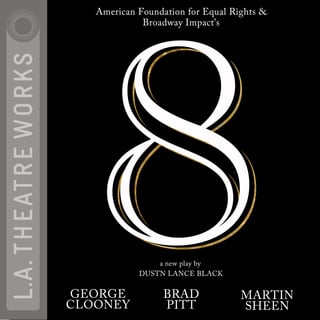 Scritto da: Dustin Lance Black
Letto da: Various Narrators, Jamie Lee Curtis, George Clooney
Formato: Audio
2H 6Min
Inglese
3,79
George Clooney, Brad Pitt, and Martin Sheen lead an all-star cast in this powerful portrait of an American civil rights struggle. In 2008, California's Proposition 8 stripped the freedom to marry away from gay and lesbian couples. Now, two of the nation's most renowned attorneys have joined forces to challenge Proposition 8 under the United States Constitution. '8' faithfully recreates the progression of the historic trial through court transcripts and interviews with the plaintiffs, as their stories are brought to life before a live audience.

Directed by Rob Reiner. Recorded before a live audience at the Wilshire Ebell Theatre, Los Angeles in March of 2012.