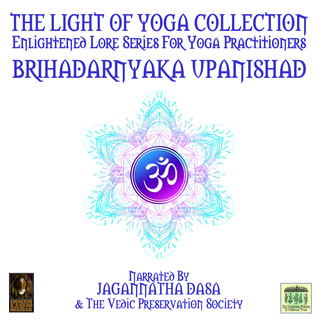 Scritto da: Unknown
Letto da: Jagannatha Dasa, The Vedic Preservation Society
Formato: Audiolibro
5H 1Min
Inglese
The Upanishads are an assortment of texts central to Hinduism (or the Sanatan Dharma) recorded from oral traditions. They contain the philosophical principles and concepts of Hinduism, including karma (right action), brahman (ultimate reality), the atman (true Self or soul), moksha (liberation from the cycle of reincarnation) and other complex Vedic doctrines which explain Self-realization through the ancient yoga system and other meditational and service practices.

"Upanishad" is a Sanskrit word which translates to “sitting at the feet of” or “sitting down near." This alludes to receiving wisdom and guidance humbly from a realized guru.

There are more than 200 Upanishads. Thirteen of these include the core philosophical teachings of what we now call Hinduism. The philosophical concepts contained in the Upanishads are principal to the Sanatan Dharma, but many are also shared with Buddhism and Jainism.

The deeply poetic texts govern ideals of ultimate Self-realization as well as concepts of non-violence, compassion, charity and self-restraint as ethical concerns.

Beautifully presented by Jagannatha Dasa and the artists and devote
es of the Vedic Preservation Society here is an audiobook which not only entertains, enlightens and deeply informs but just might positively change your life forever for the better.

Divine Secrets Of The Vedas: Devotional Yoga, One Step Into The Light

The Great Loneliness of God: Talks on the One in All

Wisdom of the Ages: The Upanishads – Sublime Teachings of the Vegas

Eternal Teaching of The Bhagavad Gita - The Song Of God

The Dharmapada: The 100 Petal Jeweled Lotus Of Wisdom

Divine Secrets Of The Vedas: Devotional Yoga, Journey To Self

Don't Worry Be Happy: Meher Baba In His Time – The Divine Discourses

Ancient Secrets of Mystical Yoga – The Icon Das Avatar Series: The Divine Pastimes Of Lord Varaha – The Boar Incarnation of the Supreme Personality of Godhead

The Tao Happiness: Stories from Chuang Tzu for Your Spiritual Journey

The Yoga Sutras of Patanjali

Miracle Of Love: The Life & Words of Neem Karoli Baba