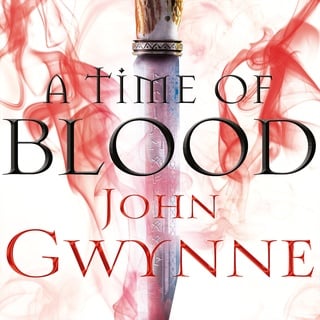 Scritto da: John Gwynne
Letto da: Damian Lynch
Formato: Audio
15H 26Min
Inglese
3,76
A Time of Blood, the second book in the Of Blood and Bone series, is the spectacular follow-up to A Time of Dread by John Gwynne.

Defy the darkness. Defend the light . . .

At the battle of Starstone Lake, Drem and his friends witnessed horrors they’ll never forget. They saw magic warping men into beasts and a demon rise from the dead, creating something new and terrifying. So they flee to warn the Order of the Bright Star. But the demons’ high priestess, Fritha, is determined to hunt them down.

Concealed in Forn Forest, Riv struggles to understand her half-breed lineage. It represents the warrior angels’ most dangerous secret, so when their high captain tracks her down, he aims to kill.

Meanwhile, demonic forces are gathering a mighty war-host, to crush their enemies and rule the world of man. And the angels are already fractured and facing betrayal. Like heroes of old, Riv, Drem and the Bright Star’s warriors must battle to save their land. But can the light triumph when the dark is rising?

Continue the heroic fantasy series with A Time of Courage.

'A great read that accelerates the pace and goes one up on its excellent predecessor . . . Exciting, action-packed fantasy'
Mark Lawrence

'This is extraordinarily good, an epic feat of the imagination. In this series Gwynne is setting a new benchmark in fantasy. I’d love to see it on screen'
Giles Kristian

The Queen of the Tearling

The Hyena and the Hawk