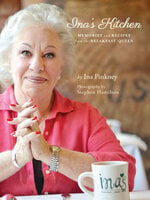 Ina's Kitchen: Memories and Recipes from the Breakfast Queen

Ina Pinkney—the beloved restaurateur known affectionately as the “Breakfast Queen” —has been feeding Chicago for more than 30 years. When she closed her namesake restaurant’s doors in 2013, it headlined news across the Midwest. Now, the favorite dishes that thousands came to love at Ina’s are showcased in Ina’s Kitchen: Memories and Recipes from the Breakfast Queen.

Ina’s Kitchen is part cookbook part memoir, collecting 39 of Ina’s favorite recipes with stories from her life. From milestone moments and warm memories to the “truth” about owning a restaurant, readers will gain a deeper understanding of one of Chicago’s best-known culinary icons.

Ina views her life as a recipe, and the book’s chapters reflect that notion. From “Ingredients” and “Preparation” to “Clean Up,” readers will come to understand what inspired and drove Ina’s love of food—and her culinary success. Recipes include everything from Ina’s signature Blobbs and Heavenly Hots to Foolproof Pancakes and Baked French Toast. In addition to breakfast favorites, Ina has also included savory dishes and dessert recipes.

Ina’s Kitchen is “a diary, a confession, a legacy, a love letter, and a cookbook all in one. And no one does breakfast better!” (Gale Gand, James Beard Award–winning chef)