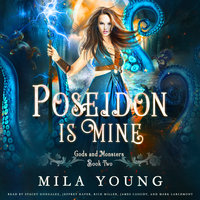 Poseidon Is Mine: Gods and Monsters, Book Two

I’m a champion. Bound to fight Titans. Sworn to act as Zeus’ shield and defend the gods.

And I’m in trouble.

Apollo’s bright love is consuming, and the dark god Hades fills my dreams with lust and desire. Even though I’m torn between them, the sea god, Poseidon, surfaces to calm the chaos, except I’m falling for him.

I’m living my new life on a sword’s edge, losing part of myself with each passing day. Trying to walk the fine line between my humanity and godhood is proving difficult.

Heracles attempts to help me control my new power, and Ares insists I leap into the fight. All while the darkness is consuming souls with greater frequency. And I worry not even the gods can stop Death.

I’m drowning in Poseidon’s affection…it’s either hold on tight…or be swept away. But either way, Poseidon is mine.

Poseidon is Mine is book 2 in the Gods and Monsters series.

Trigger warning, Poseidon Is Mine contains a violent scene that may be difficult for some readers.

Content Warning: Steamy love scenes, dominating alphas who protect their female, and plenty of sexy Greek gods who will leave you breathless.