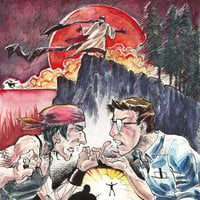 Fifteen years after the fallout of a massive energy crisis, steadfast homesteaders in rural Maine slog through an off-grid life. This bucolic existence is turned upside-down when John Prophet, a soldier still fighting an unwinnable war, arrives with word of a powerful military force setting up in the ashes of old New York. His message falls on deaf ears except for those of two youths, Maria and Luke, who buck their parents’ wishes and set off on a journey filled with grim survivalists, rugged characters, religious maniacs, and dangers of nature that have grown up in this strange land.

In what was once New York, life is a tenuous and desperate thing, and the arrival of a military force that offers safety at the expense of freedom is welcomed with open arms. Yet this regime is only the beginning of the troubles in this region. Out of the West, a man comes announcing a great holy war that is to come, and from within the ranks of the military regime comes a man who will stop at nothing to take control of their weapons to sacrifice to his dark God.

This lush “mind movie” features over thirty actors, was recorded on locations throughout southern Maine, and features an original score and the production talents of award-winning producer Fred Greenhalgh. Called “epic” by BBC Radio 4 Producer John Dryden, this audio theater production is sure to thrill.