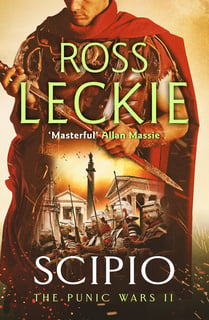 In the name of Rome, Scipio Africanus conquered the hard-won empires of Carthage and of Alexander the Great.

Now beset in his old age by the menacing political movements of Cato, Scipio details the epic story of his life, from the earliest days of his education, to the great battles he won in service to his home.

Yet all the strands of his remarkable tale are anchored, flowing from and towards the confrontation between him and his great rival, his one and only equal… Hannibal.

This novel of love and betrayal recreates the life and times of a military genius who discovers he is only a man, and is perfect for fans of Simon Scarrow, Ben Kane and I, Claudius.

‘Leckie writes unflinchingly of this world of blood, battle and atrocity’ Sunday Telegraph

‘By turns lucid, enlightening and thrilling, this is the historical novel at its best’ Historical Novel Society

The Measure of the World

A Column of Fire

The Cross and the Curse

The Lost Diary of M: A Novel