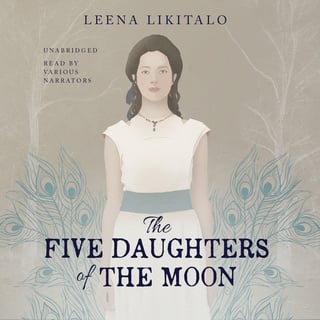 The Crescent Empire teeters on the edge of a revolution, and the Five Daughters of the Moon are the ones to determine its future.

Alina, six, fears Gagargi Prataslav and his Great Thinking Machine. The gagargi claims that the machine can predict the future, but at a cost that no one seems to want to know.

Merile, eleven, cares only for her dogs, but she smells that something is afoul with the gagargi. By chance, she learns that the machine devours human souls for fuel, and yet no one believes her claim.

Sibilia, fifteen, has fallen in love for the first time in her life. She couldn’t care less about the unrest spreading through the countryside. Or the rumors about the gagargi and his machine.

Elise, sixteen, follows the captain of her heart to orphanages and workhouses. But soon she realizes that the unhappiness amongst her people runs much deeper that anyone could have ever predicted.

And Celestia, twenty-two, who will be the empress one day. Lately, she’s been drawn to the gagargi. But which one of them was the first to mention the idea of a coup?
Editorial: Blackstone Audio
Publicado: 2017-07-25
ISBN: 9781538407578
7H 49M
Inglés
3,85
Categoría: Fantasía & Ciencia ficción
Colecciones: The Waning Moon: 1
Fantasía Rusia

An Unkindness of Magicians

The Sisters Grimm: A Novel

Sorcerer to the Crown

Dark Tower I: The Gunslinger

The Order of the Pure Moon Reflected in Water

The Last Days of New Paris

Across the Nightingale Floor