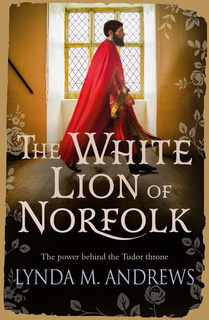 The White Lion of Norfolk

The White Lion of Norfolk

Autor: Lynda M. Andrews
Formato: Libro electrónico
Inglés
2
Meet Thomas Howard: his quest for power knows no bounds
The White Lion of Norfolk is the story of Thomas Howard, Third Duke of Norfolk: a ruthless, unscrupulous man willing even to use his two nieces, Anne Boleyn and Catherine Howard, as pawns to curry political favour.

Amidst the pomp and pageantry of the Royal Court, Howard climbs the greasy pole of ambition, remaining totally subservient to his master, King Henry VIII. His devotion places him at odds with his wife, the daughter of the Duke of Buckingham, who was put to death by the King. It pits him as rival and ally to such men as Cardinal Wolsey, Thomas More and Thomas Cromwell, and leads him perilously close to the unsavoury death many feel his savage cruelty deserves.

But will he live to see his great niece, Elizabeth Tudor, become Queen?

Lynda M. Andrews, who also writes as Lyn Andrews, is the Sunday Times Number One bestselling author of over 34 sagas, and one of the top 100 bestselling authors in the UK. She was born and raised in Liverpool, which serves as the inspiration for many of her novels. She now divides her time between Merseyside and the Isle of Man, where she has lived for several years.
Editorial: Canelo Saga
Publicado: 2017-05-22
ISBN: 9781911591375
Inglés
2
Categoría: Novelas
Novelas históricas

The Ladies of Missalonghi

Summerset Abbey: A Bloom in Winter

The House at Riverton

The Song of Troy

A God Against the Gods

This Passing World: The Journal of Geoffrey Chaucer