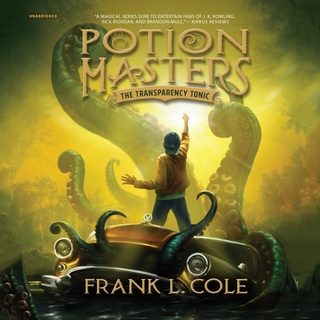 Autor: Frank L. Cole
Narrador: Michael Crouch
Formato: Disponible como audiolibro
9H 44M
Inglés
4,6
It has been nine months since Gordy and his friends, Max and Adilene, stopped Esmeralda from destroying B.R.E.W. and the Vessel. Gordy is starting the eighth grade, where he meets another Dram, Sasha Brexil, whose mother is the new President of B.R.E.W. Gordy has also been practicing new brewing techniques, and has even taken some of his potions to school—something expressly forbidden—but when he starts zoning out during practice, he knows something is wrong.

Strange things are also happening at B.R.E.W., because after Wanda confronts the dark Elixirists, she is unexpectedly fired by Mrs. Brexil. And in Greenland, Mezzarix is offered a chance to escape by an old friend, who is working for the mysterious Ms. Bimini. The woman reveals that she needs Mezzarix to replicate an unusual solution known as “Silt.” Mezzarix agrees on one condition: that Ms. Bimini uses the power of Silt to destroy B.R.E.W. forever.

Gordy and his friends continue to work on their potions, but when Adilene learns she will never be able to brew potions—that the only reason she had ever come close was because Gordy was Projecting his ability through her—she is crushed. Against her better judgment, she uses an invisibility potion given to her by her new friend, Cadence, to spy on Gordy.

As Gordy’s potion-making talents increase, so does the frequency of his blackouts, which raises a troubling question: What if Mezzarix attacks during one of Gordy’s blackouts?

The Keepers #4: The Starlit Loom