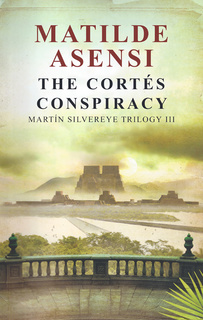 Autor: Matilde Asensi
Formato: Libro electrónico
Inglés
5
With The Cortes Conspiracy, the last book in the trilogy Martín Silvereye, Matilde Asensi reaches the climax of her journey through the Spanish Golden Age, from the perspective, this time, of the Viceroyalty of New Spain. These exciting pages narrate the intrigues and the political and economic relationships which, from the other side of the Atlantic Ocean, pointed at the Spanish Crown, providing the reader with a better understanding of this stage of history.

In this eagerly awaited novel, Catalina Solis is forced to unmask a plot which has been hatched by her enemies to overthrow the king of Spain. Once again the protagonist of the novel will have to confront noblemen from Seville and enemies she thought she had already defeated.

The appearance of a map, which shows where the treasure of Hernan Cortes is lying, will play a key role in Catalina’s plan to unmask the traitors and keep her Word of ruining the Curvos. The doublé personality Catalina Solis/Martín Nevares will not only confront her/his opponents, but also a serious threaten for her.

Over 300.000 copies sold in Spanish by the so called ‘Queen of the Spanish Adventure Fiction,' one of the top writers in Spanish language, and author of the bestseller The Last Cato.
Editorial: Matilde Asensi
Publicado: 2017-07-27
ISBN: 9788469752968
Inglés
5
Categoría: Novelas
Novelas históricas

On Wilder Seas: The Woman on the Golden Hind

The Witch of Willow Hall

Southern Seahawk: A Novel of the Civil War at Sea

The Hunt for the North Star