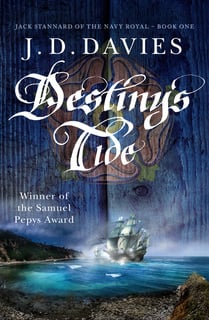 Jack Stannard has spent his whole life at sea, enduring savage beatings from his father and the furious aggression of whip-cracking storms. But a more cruel and dangerous foe is on the horizon.

When Henry VIII dissolves the monasteries and wages war against France and Scotland simultaneously, Jack must take up his family destiny at the head of the Dunwich fleet.

But enemy blades may be the least of his problems. Aging ships, treacherous rivals and ghosts from the past all threaten to interfere with the war effort. The only man he can trust is Thomas Ryman, a former warrior turned monk.

As the English fleet descends on Edinburgh, the dangerous game of politics and war reaches a shattering climax aboard the pride of Henry’s navy – the Mary Rose. Stannard and Ryman know that it is not just their lives that are at stake, but the future of England herself...
Stuffed to the gunwales with gripping naval combat and adventure, Destiny’s Tide is the first in a thrilling new series set amidst the rise of the Tudor Navy, perfect for fans of Julian Stockwin, C. S. Forester’s Hornblower, and Patrick O’Brian
Editorial: Canelo Adventure
Publicado: 2019-06-27
ISBN: 9781788632300
Inglés
3,25
Categoría: Novela negra
Thrillers Novelas históricas Misterios históricos Historias del mar

The Sword of Moses

Roman II – The Rise of Caratacus

The House of the Red Slayer

The Cross and the Curse

Beasts From The Dark