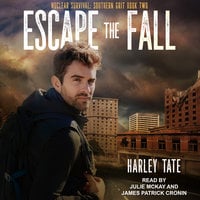 After the unthinkable, would you know what to do?

With a four-legged companion and no food in the pantry, Grant Walton faces an uphill battle. His wife is still missing, downtown is a smoldering crater, and radiation is killing more people every day. Torn between searching for his wife and gearing up for what's sure to come, Grant is forced to put more than his morals to the test.

A nuclear attack wounds long after the explosion.

Leah Walton escaped a nuclear bomb that flattened her hospital and vaporized her friends. Now she's racing to find her husband miles away. When her borrowed car ends up in a twisted, smoking heap, she wakes up injured and alone. She'll have to rely on the kindness of strangers to survive and hope none of them kill her in the process.

Could you drop everything to save yourself?

While Grant and Leah struggle to stay alive, the United States falls deeper into chaos. Bombs destroyed cities, but mankind will rip the country apart. Can Grant find his wife in a city of six million people? Can Leah survive until he does?

The attack is only the beginning.

Escape The Fall is book two in Nuclear Survival: Southern Grit, a post-apocalyptic thriller series following ordinary people struggling to survive after a nuclear attack on the Unites States plunges the nation into chaos.