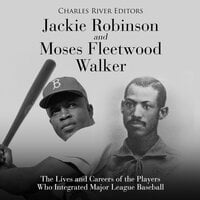 Jackie Robinson and Moses Fleetwood Walker: The Lives and Careers of the Players Who Integrated Major League Baseball

In his introduction to The Jackie Robinson Reader, sports historian Jules Tygiel succinctly observed, “Extraordinary lives often reveal ordinary truths. Jackie Robinson was born in 1919 and died in 1972. He crammed into these brief ﬁfty-three years a legacy of accomplishment, acclaim, controversy, and inﬂuence matched by few Americans. He was, even before his historic baseball breakthrough, an athlete of legendary proportions. He won fame and adulation as the ﬁrst African-American to play in the major leagues in the twentieth century, launching an athletic revolution that transformed American sports. He garnered baseball's highest honors: Rookie of the Year, Most Valuable Player, and ﬁrst-ballot election to the Hall of Fame. More signiﬁcantly, Robinson became a symbol of racial integration and a prominent leader in the civil rights struggle of the 1950s and 1960s. Yet Jackie Robinson's half century among us illuminates not just the contours of an exceptional life, but much about the broader African-American experience of those years.”

Given his legacy, many Americans today believe Jackie Robinson was the first black man to play in Major League Baseball, but that answer is wrong. As far back as the late 19th century, there had been professional baseball leagues that were every bit as segregated as any other aspect of society, but before that, there were, for a brief shining moment, there were teams of black and white men playing with and against each other.

One of the first black men to play on such a team was Moses Fleetwood Walker, and he was the first who openly identified as black. As racism and segregation successfully pushed black players out of professional baseball, it was all but forgotten that professional baseball had once been integrated before Jackie Robinson broke the color barrier, ensuring that the contributions of Walker and other early black athletes would be obscured and then eclipsed.