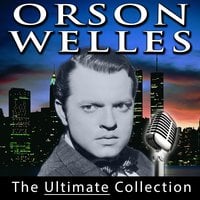 If you are a lover of old-time radio and a fan of Orson Welles, you won't want to miss this treasure chest of legendary Orson Welles radio broadcasts! With his flair for the sensational and innovative, Welles captured audiences' attention with his 1930s CBS weekly drama series The Mercury Theatre on the Air, later renamed The Campbell Playhouse, which featured hour-long dramatizations of classic books. His 1938 production, The War of the Worlds (an H. G. Wells adaptation) was especially memorable, as were many other productions, each featuring talented voices and actors.

Tune into the master of entertainment and enjoy this collection of original Orson Welles recordings, including more than 16 hours of radio drama! Content: