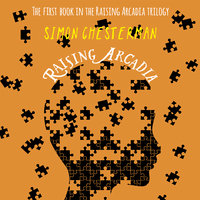 Arcadia sees the world like no one else. Exceptionally observant, the sixteen-year-old is aware of her surroundings in a way that sometimes gets her into trouble — and out of it again. But when she seeks to unravel a mystery at school, a tragedy at home forces her to use her skills to catch a killer.

“She’s Harry Potter without a wand; Katniss Everdeen without a quiver. It’s the world against Arcadia, armed only with her fabulous, prodigious, logical mind. A super impressive debut.” —Tony Wilson, author of Players & Making News

“Raising Arcadia is a pacy mystery novel that has, at its centre, the irrepressible (and perhaps sociopathic) heroine Arcadia, a sixteen-year-old searching for her place in the adult world. Stuffed with intrigue and mystery, it will be adored by young adults and by adults who prize curiosity and challenge. Read it — and then read it again, to see if you noticed all the clues.” —Adrian Tan, lawyer and author of The Teenage Textbook