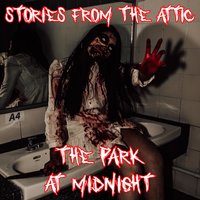 The Park at Midnight

Honestly, until the thing with Stephen Mellor I'd never understood how people managed to be scared of ghosts.

Monsters I could understand, serial killers even more so. Monsters like werewolves and vampires had huge tearing teeth and ripping claws, whilst serial killers, even fictional ones, thrust with their horribly pointed kitchen knives or smacked their lips at the thought of devouring you. I could even understand people feeling creeped out by aliens and the kind of mutant creatures and robots you see in sci-fi. To me, being scared of that stuff made sense. But ghosts?

Perhaps it was the tangibility of the others. The idea that monsters and aliens, if real, could actually do you harm in the physical world, that they were in some way more solid and physically threatening in a literal, touchable way. I could understand being scared of that, but bedsheets going 'whooo' like a boiling kettle, or ghoulies and dead people creeping around in churchyards on tiptoe just didn't cut the mustard.

When I heard reports of plates and furniture flying around, I assumed it was a domestic, not a poltergeist. Christ knows my wife has thrown some crockery in her time. When something went bump in the night, I assumed it was either a burglar or some local pisshead too drunk to get his key in the door.