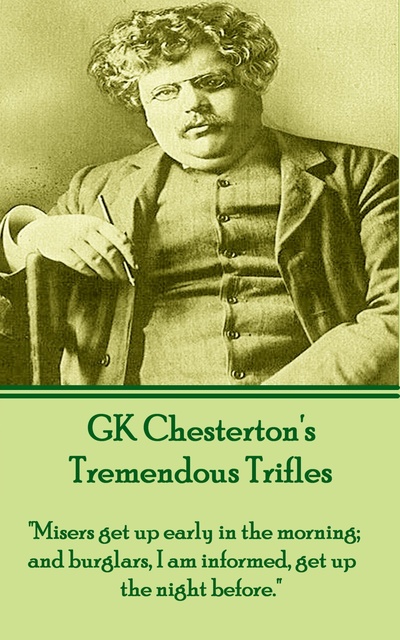 Tremendous Trifles: "Misers get up early in the morning; and burglars, I am informed, get up the night before."

Tremendous Trifles: "Misers get up early in the morning; and burglars, I am informed, get up the night before."

Gilbert Keith Chesterton, (29 May 1874 – 14 June 1936) was a poet, novelist, playwright, literary commentator, editor, biographer, journalist, orator and theologian. He was often dubbed as the “prince of paradox” for his light whimsical style that often addressed serious issues such as politics and religion. The latter was as a member and defender of the Christian faith and the former was shaped by a distrust of concentrated wealth and power. He advocated Distributionism and said that every man should be allowed to own "three acres and a cow." These political views have spread round the world, crediting Chesterton as the father of the “small is beautiful” movement. It is also said to have influenced Gandhi in seeking a genuine nationalism for India rather than imitating the British state. This charming collection of essays shows G. K. Chesterton's wit and humour, while also pointing out the weightiness of all the little moments and events in our lives.