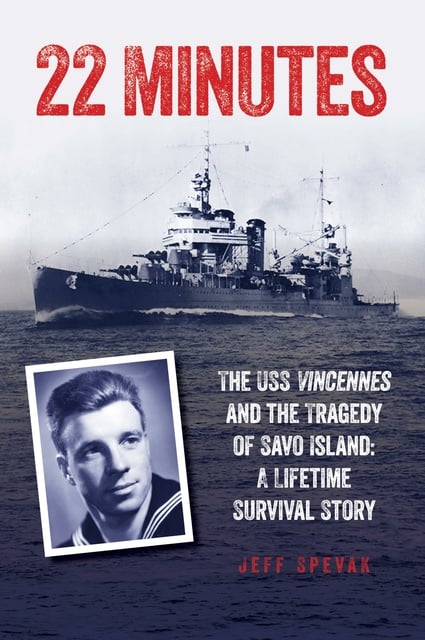 22 Minutes: The USS Vincennes and the Tragedy of Savo Island: A Lifetime Survival Story

22 Minutes: The USS Vincennes and the Tragedy of Savo Island: A Lifetime Survival Story

Ernie Coleman survived the worst open-sea defeat in US Navy history. But he paid a price and buried the horrific memories for decades. In the manner of Mitch Albom’s highly successful Tuesdays with Morrie, 22 Minutes is a searing account of a survivor coming to terms with an incident he had suppressed for sixty years and the writer who painstakingly put together the clues about what had happened.

Author Jeff Spevak was confronted with a dilemma: How do you tell the story of a man who can’t bring himself to talk about the most epic moment of his life? A clever fellow who’d scrapped to survive in a fashion that seems quaint today, Coleman tested himself as a teenager by swimming across lakes, building homes from foraged lumber, running a Navy carpentry shop as though he were a member of the scamming crew of McHale’s Navy. He was a self-taught sailor who’d become a legend on Lake Ontario. At age 96, Ernie was still sailing. Ernie Coleman talked of his life frankly – his honest remembrances of brawls and regrets. But he refused to talk about the one thing that had haunted him for decades: the sinking of his ship the Vincennes and his nightmares of men screaming in the burning sea, of incinerated corpses still manning the anti-aircraft guns.

Through interviews with Coleman's family and others who knew Coleman, and arduous research Spevak finally put together what had occurred the night of the horrendous loss of his ship, the USS Vincennes, a cruiser sunk during the World War II Battle of Savo Island off Guadalcanal. Four big ships and more than 1,000 sailors were lost that night in a 22-minute battle, the worst open-sea defeat in the history of the United States Navy.

Gripping, moving, highly personal, 22 Minutes is Coleman’s story of the incident he had buried for more than 60 years. Did Ernie pursue sailing with such intensity, at a time when most men his age are sitting in front of the television, waiting for the end, so that he did not have to close his eyes and remember that night on the Vincennes?

“I know why those kids come back from Afghanistan and shoot themselves,” he said sadly one morning, sitting on the shady patio at his home. “You lay awake at night, reacting, reacting, reacting. Because it’s so real.” 22 Minutes has enormous potential to match some of the best-selling first-hand World War II memoirs published in recent years.