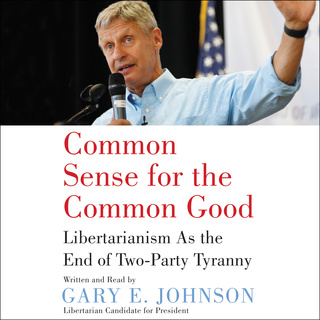 Common Sense for the Common Good

Common Sense for the Common Good

Gary Johnson, Libertarian Party candidate for president and former two-term Republican governor of New Mexico, stakes his claim to the very center of the political spectrum. His new audiobook Common Sense for the Common Good offers his approach to how a member of a third party, acting as the Chief Arbiter of the U.S., can restore sanity and functionality to the highest office in the land.

Johnson succinctly shares his views on how the two-party system is dysfunctional. How its binary approach to issues doesn’t reflect the multiplicity of viewpoints inherent in our contemporary society. How the nasty divisiveness that rules public and private discourse is endemic to this flawed and outdated system.

He offers his alternative to the dualistic electoral process—and why he believes the on/off, black/white, I’m right/you’re wrong thinking—cripples our minds and grinds government to a halt.

He takes on the challenge of explaining Libertarianism as a philosophy that espouses:
Freedom of choiceLimited government intrusion into our personal livesFree market capitalismEqualizing opportunity for all
This audiobook sets the stage for Johnson’s forthcoming book, which is part memoir and part manifesto. Here, Gary Johnson describes his own personal and political evolution. He firmly believes that, if the rigged electoral polling and debate processes were fair, the vast majority of Americans would come to understand that their beliefs and values are best represented by the Libertarian Party.
Meer info over het audioboek:
Uitgeverij: HarperAudio
Verschenen: 2016-09-27
ISBN: 9780062672056
2U 32M
Engels
Categorie: Non fictie

Dreamers and Deceivers: True and Untold Stories of the Heroes and Villains Who Made America

The All New Don't Think of an Elephant!

Whistling Past Dixie: How Democrats Can Win Without the South

The War on Guns

The Spanish-American War and World War I, Part 1

Welcome to Your Child's Brain: How the Mind Grows from Conception to College

Writing to Save a Life: The Louis Till File

The Conservative Assault on the Constitution

The Art of Nonfiction