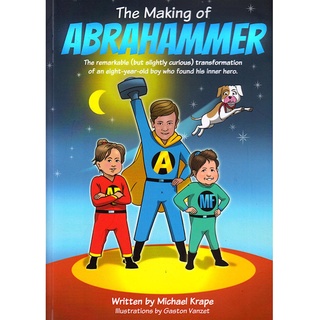 Autor: Michael Krape
Czyta: Evelyn Krape
Format: Audiobook
5H 35M
Angielski
Abraham Tisdale was a normal eight-year-old kid who did his best to avoid the school bully. He was pretty successful until one day he was cornered, with nowhere to hide. Then something remarkable happened, transforming him into one of the world's greatest superheroes - Abrahammer.

Joined by his loyal team, Ari Ferrari, Maisie Fantazie and American Bulldog cross, Nail, Abrahammer sets out to track down and confront the bully, Dim Dribblechin. But will Nail overcome her fear of heights and take to the sky? Will Ari Ferrari and Maisie Fantazie need their super-nappies changed as often as their normal nappies? And will Abrahammer's true identity be revealed before Dim Dribblechin and his accomplices, Conchita Smellyfeeta and Wilson Wobblebottom are behind bars?

The Making of Abrahammer examines the very serious issue of bullying, and explains why kids deserve to be empowered, especially when they're at their most vulnerable.
Wydawca: Author's Republic
Data wydania: 2020-04-09
ISBN: 9780646811093
5H 35M
Angielski
Kategoria: Dla dzieci

The Unlikely Story of a Pig in the City

Ben Braver and the Vortex of Doom

Alex Sparrow and the Zumbie Apocalypse

The Maze of the Menacing Minotaur

Rot, the Cutest in the World!

Beware the Ninja Weenies: And Other Warped and Creepy Tales

Undercover Robot: My First Year as a Human

My Name Is Tani ... and I Believe in Miracles (Young Readers Edition)

The Fantastic Flatulent Fart Brothers' Big Book of Farty Facts: An Illustrated Guide to the Science, History, and Art of Farting

How Women Won the Vote: Alice Paul, Lucy Burns, and Their Big Idea

Kid Normal and the Final Five