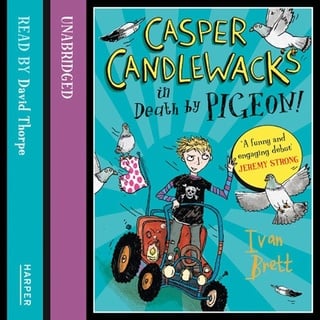 Autor: Ivan Brett
Czyta: David Thorpe
Format: Audiobook
2H 56M
Angielski
4,14
Casper Candlewacks is the only boy with any sense in a village full of idiots… a hilarious debut novel from the funniest new voice in young fiction

Most villages have an idiot but Casper's village is full of them. So being bright makes poor Casper something of an outsider. When famous magician the Great Tiramisu curses the village, Casper's father is blamed and sentenced to death by pigeon. It's up to Casper and his best friend to find the magician, reverse the curse and save the day.

Casper Candlewacks in Attack of the Brainiacs!

Casper Candlewacks in the Claws of Crime!

Time Travelling with a Hamster

Diary of a Wimpy Kid: The Last Straw

Nathalia Buttface and the Most Embarrassing Dad in the World

The Magical Peppers and the Island of Invention

Dork Diaries 8: Tales from a Not-So-Happily Ever After

Harry Potter and the Goblet of Fire