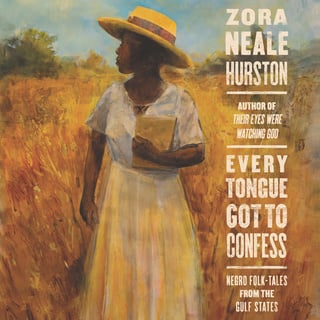 Every Tongue Got to Confess

Every Tongue Got to Confess

Hilarious, bittersweet, and often saucy, these folk-tales provide a verdant slice of African-American life in the rural South at the turn of the twentieth century. They capture the heart and soul of the vital, independent, and creative community that so inspired Zora Neale Hurston.

In Every Tongue Got to Confess, Hurston records, with uncanny precision, the voices of ordinary people -and no two actors better capture this world than Ruby Dee and Ossie Davis. They pay tribute to the richness of Black vernacular -- its crisp self-awareness, singular wit, and improvisational wordplay. These folk-tales reflect the joys and sorrows of the African-American experience, celebrate the redemptive power of storytelling, and showcase the continuous presence in America of an Afticanized language that flourishes to this day.
Performed by Ruby Dee and Ossie Davis
Wydawca: Caedmon
Data wydania: 2005-10-31
ISBN: 9780060842741
6H 46M
Angielski
Kategoria: Powieść obyczajowa
Powieść historyczna Powieść historyczna

Dust Tracks on a Road