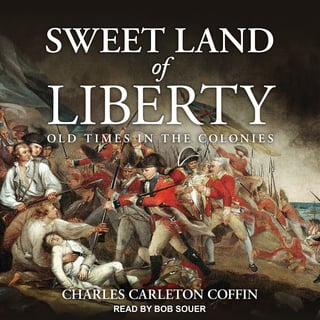 The oppressive laws, habits and customs of the Old World no longer held such power over those who had made the treacherous journey across the Atlantic. No reigning monarch or dictatorial power ever stepped onto the ground of North America. Yet, despite this, the men and women thirteen colonies of North America were still not free until they threw off the shackles of England's government and asserted their own rights.

The journey between the discovery of America to the eventual liberation of the United States after the Revolutionary War was a long and turbulent one that Charles Carleton Coffin uncovers through the course of his book Sweet Land of Liberty.

This book is a must-listen for anyone interested in the early history of the United States and how ideas of liberty and freedom were developed in the colonies prior to the War of Independence.
Wydawca: Tantor Audio
Data wydania: 2019-04-23
ISBN: 9781977345745
10H 29M
Angielski
4
Kategoria: Historia
Historia USA

Forced Founders: Indians, Debtors, Slaves, and the Making of the American Revolution in Virginia

The Pioneers: The Heroic Story of the Settlers Who Brought the American Ideal West

Jefferson, Madison, and the Making of the Constitution

Defiance of the Patriots: The Boston Tea Party and the Making of America

George Mason: The Founding Father Who Gave Us the Bill of Rights

The City-State of Boston

The Will of the People

Give Me Liberty or Give Me Death