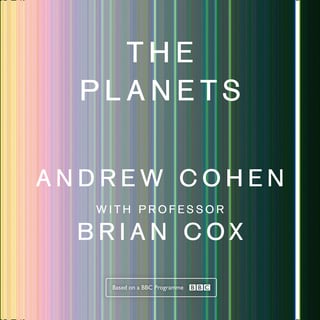 A companion book to the critically acclaimed BBC series.

The bestselling authors of Wonders of the Universe are back with another blockbuster, a groundbreaking exploration of our Solar System as it has never been seen before.

Mercury, a lifeless victim of the Sun’s expanding power. Venus, once thought to be lush and fertile, now known to be trapped within a toxic and boiling atmosphere. Mars, the red planet, doomed by the loss of its atmosphere. Jupiter, twice the size of all the other planets combined, but insubstantial. Saturn, a stunning celestial beauty, the jewel of our Solar System. Uranus, the sideways planet and the first ice giant. Neptune, dark, cold and whipped by supersonic winds. Pluto, the dwarf planet, a frozen rock.

Andrew Cohen and Professor Brian Cox take readers on a voyage of discovery, from the fiery heart of our Solar System, to its mysterious outer reaches. They touch on the latest discoveries that have expanded our knowledge of the planets, their moons and how they come to be, alongside recent stunning and mind-boggling NASA photography.
Wydawca: William Collins
Data wydania: 2019-05-23
ISBN: 9780008294311
7H 43M
Angielski
4,58
Kategoria: Literatura Faktu

The Infinite Monkey Cage – How to Build a Universe

Death by Black Hole, and Other Cosmic Quandaries

At the Edge of Time: Exploring the Mysteries of Our Universe's First Seconds

The Beginning and the End of Everything: From the Big Bang to the End of the Universe

When the Earth Had Two Moons: Cannibal Planets, Icy Giants, Dirty Comets, Dreadful Orbits, and the Origins of the Night Sky

Dark Matter & Dark Energy: The Hidden 95% of the Universe