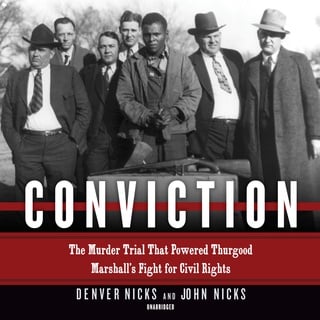 Autor: Denver Nicks, John Nicks
Czyta: Ron Butler
Format: Audiobook
6H 32M
Angielski
3,5
On New Year’s Eve, 1939, a horrific triple murder occurred in rural Oklahoma. Within a matter of days, investigators identified several suspects: convicts who had been at a craps game with one of the victims the night before. Also at the craps game was a young black farmer named W. D. Lyons. As anger at authorities grew, political pressure mounted to find a villain. The governor’s representative settled on Lyons, who was arrested, tortured into signing a confession, and tried for the murder.

The NAACP’s new Legal Defense and Education Fund sent its young chief counsel, Thurgood Marshall, to take part in the trial. The NAACP desperately needed money, and Marshall was convinced that the Lyons case could be a fundraising boon for both the state and national organizations. It was. The case went on to the US Supreme Court, and the NAACP raised much-needed money from the publicity.

Conviction is the story of Lyons v. Oklahoma, the oft-forgotten case that set Marshall and the NAACP on the path that led ultimately to victory in Brown v. Board of Education and the accompanying social revolution in the United States.
Wydawca: Blackstone Publishing
Data wydania: 2019-06-04
ISBN: 9781982652722
6H 32M
Angielski
3,5
Kategoria: Historia
USA

Innocent Blood: A True Story of Obsession and Serial Murder

The Axeman of New Orleans: The True Story

Manson: The Life and Times of Charles Manson

The Man from the Train: The Solving of a Century-Old Serial Killer Mystery

Dirty John and Other True Stories of Outlaws and Outsiders

Reasonable Doubt: A Shocking Story of Lust and Murder in the American Heartland

Under the Trestle: The 1980 Disappearance of Gina Renee Hall & Virginia’s First “No Body” Murder Trial