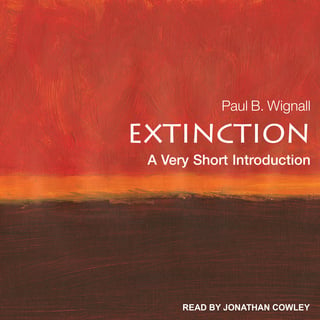 Autor: Paul B. Wignall
Czyta: Jonathan Cowley
Format: Audiobook
4H 7M
Angielski
4
Most people are familiar with the dodo and the dinosaur, but extinction has occurred throughout the history of life, with the result that nearly all the species that have ever existed are now extinct. Today, species are disappearing at an ever increasing rate, while past losses have occurred during several great crises. Issues such as habitat destruction, conservation, climate change, and, during major crises, volacanism and meteorite impact, can all contribute towards the demise of a group.

In this Very Short Introduction, Paul B. Wignall looks at the causes and nature of extinctions, past and present, and the factors that can make a species vulnerable. Summarizing what we know about all of the major and minor extinction events, he examines some of the greatest debates in modern science, such as the relative role of climate and humans in the death of the Pleistocene megafauna, including mammoths and giant ground sloths, and the roles that global warming, ocean acidification, and deforestation are playing in present-day extinctions.
Wydawca: Tantor Audio
Data wydania: 2019-09-10
ISBN: 9781515933311
4H 7M
Angielski
4
Kategoria: Literatura Faktu

A Season on the Wind

Extreme Cities: The Peril and Promise of Urban Life in the Age of Climate Change

The Invaders: How Humans and Their Dogs Drove Neanderthals to Extinction

The Geography of Nowhere: The Rise and Decline of America's Man-made Landscape

The Song of the Dodo: Island Biogeography in an Age of Extinctions

Vaquita: Science, Politics, and Crime in the Sea of Cortez

Resilience Thinking: Sustaining Ecosystems and People in a Changing World

Down to the Wire: Confronting Climate Collapse

The Future Earth: A Radical Vision for What's Possible in the Age of Warming