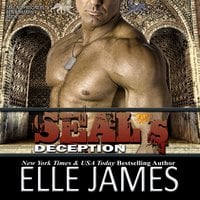 A Navy SEAL poses as a bodyguard to a sexy CIA operative undercover as the arranged bride of a Saudi prince in search of the biological weapons sale traced to the prince's palace.

Ben "Big Bird" Sjodin, one of the biggest, baddest SEALs on SEAL Team 10, is tasked to work with a CIA operative on a special project with two of his teammates. All he knows is to meet his contact in a swanky bar in London. From there, he'll receive instructions.

Fired from INTERPOL for an affair with a double agent, Yasmin Evans has a lot to prove in her role as a CIA agent. Her goal? Infiltrate a Saudi palace, find vials of biological weapons of mass destruction, retrieve them, and save the world. All with no more support than that of three Navy SEALs.

Yasmine's plan? Go undercover as the arranged bride of a Saudi prince with her three bodyguards. Once inside the palace, they will search for and find the deadly weapons. What she doesn't plan on is the burning attraction she has for the bodyguard who could have been a Norse god in another time, or the Saudi familial factions determined to keep the prince from marrying his arranged bride. Inside an opulent palace, danger and passion flare.