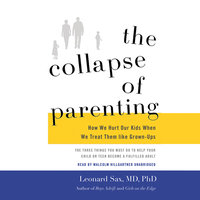 The Collapse of Parenting

In The Collapse of Parenting, Leonard Sax, an acclaimed expert on parenting and childhood development, identifies a key problem plaguing American children, especially relative to other countries: the dramatic decline in young people’s achievement and psychological health. The root of this problem, Sax contends, lies in the transfer of authority from parents to their children, a shift that has been occurring over the last fifty years and is now impossible to ignore. Sax pinpoints the effects of this shift, arguing that the rising levels of obesity, depression, and anxiety among young people—as well as their parents’ widespread dependence on psychiatric medications to fix such problems—can all be traced back to a corresponding decline in adult authority.

Sax argues that a general decline in respect for elders has had particularly severe consequences for the relationship between parents and their children. The result is parents are afraid of seeming too dictatorial and end up abdicating their authority entirely rather than taking a stand with their own children. If kids refuse to eat anything green and demand pizza instead, parents give in, inadvertently raising children who expect to eat sweets and junk food and are thus more likely to become obese. If children demand and receive the latest smartphones, tablets, and other gadgets, and are then allowed to spend the bulk of their waking hours texting with friends and accessing any website they want, they become increasingly reliant on peers and the media for guidance on how to live, rather than their parents. And if they won’t sit still in class or listen to adults—parents or teachers—they’re often prescribed medication, a quick fix that doesn’t help them learn self-control. In short, according to Sax, parents have failed to teach their children good habits, leaving children with no clear sense of the distinction between right and wrong.

But Sax insists there is hope. To start with, parents need to regain a central place in the lives of their young children, displacing same-age peers who can’t provide the same kind of guidance and stability. Parents also need to learn that they can’t be a best friend and a parent at the same time. They’ll make their children’s lives easier if they focus not on pleasing their kids, but instead on giving them the tools they need to lead happy, healthy lives.

Drawing on over twenty-five years of experience as a family psychologist and hundreds of interviews with children, parents, and teachers in the United States and throughout the world, Sax makes a convincing case that if we are to help our children avoid the pitfalls of an increasingly complicated world, we must reassert authority as parents.