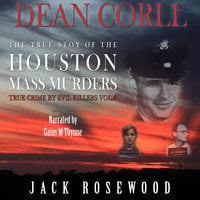 Dean Corll - The True Story of The Houston Mass Murders

In an area of Houston known as the Heights, boys had been going missing for years, but it was the peace-and-love 1970s, so police just called them runaways, even if they'd left with little more than a swimsuit and some change. When the truth was uncovered, and police - and the rest of Houston - realized the boys had become victims of notorious American serial killer Dean Corll, Houston recoiled in horrified shock.

Residents realized that they had not only become the site of the most grisly mass murder in Texas history, but the worst mass murder in all of U.S. history. The word serial killer had not yet been coined, and as body after decomposing body was uncovered from the dirt floor of the boat shed where Corll and his two young accomplishes had buried most of the victims, there were hardly words for what this sadistic lust killer had done. The depraved evil that Corll and his accomplices - two teen boys themselves who were promised money but eventually developed a thrill for the kill - was revealed as one of the cohorts, Wayne Henley, calmly, affably, told the stories of how after Corll sexually assaulting them and tortured them in unimaginable fashion, they would kill them and take the boys' bodies away to bury them beneath the dirt.

This serial killer's biography will haunt you, especially as you learn more about the sadistic torture methods lust killer Corll used on his young victims, all lured to his various apartments by people they believed were their friends. While Corll is dead, killed by Henley during the lust killer's last night of depravity, the case remains entwined in Houston history, and unforgettable for the families of those who lived it.