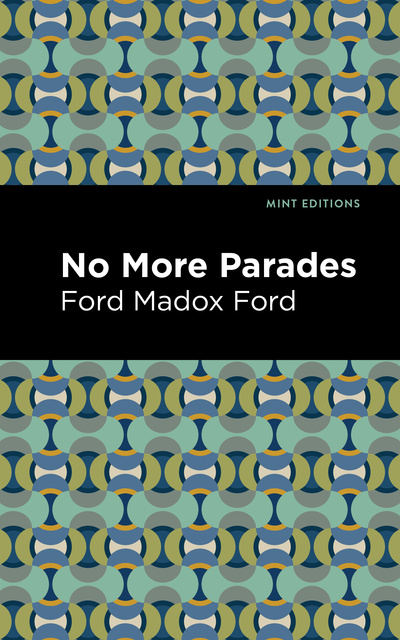 No More Parades (1924) is a novel by Ford Madox Ford. Set during the First World War, the novel is the story of Christopher Tietjens, a brilliant statistician and wealthy aristocrat known as “the last Tory.” As he moves from a faithless marriage into an affair of his own, eventually volunteering to fight under dubious—perhaps suicidal—motives, Tietjens appears both symbolic and tragically human, a casualty of a dying era dedicating its final breaths to death, despair, and destruction.

Adapted for television twice—a 1964 series starring Ronald Hines and Judi Dench, as well as a 2012 series starring Benedict Cumberbatch and Rebecca Hall—Parade’s End is essential to Ford’s reputation as a leading novelist of the twentieth century. In the words of W. H. Auden, “There are not many English novels which deserve to be called great: Parade’s End is one of them.” Having gone to war to leave his troubled romantic life behind him, Christopher Tietjens is late to realize that the glories of battle are a dangerous fiction indeed.

Now a Captain, he is responsible for thousands of soldiers on the front lines of France, most of whom were not born into fortune as he was. As a German assault rains fire on their vulnerable position, as Tietjens holds a dying comrade in his arms, as he witnesses the best minds of his generation go mad amid so much destruction, Tietjens attempts to maintain a shred of his own fractured humanity.

Back at home, his unfaithful wife takes full advantage of his prolonged absence, but soon longs to draw Christopher back into her life. Tragic and emotionally piercing, No More Parade’s is a story of romance, war and betrayal that proves a brilliant sequel to Some Do Not. With a beautifully designed cover and professionally typeset manuscript, this edition of Ford Madox Ford’s No More Parades is a classic work of British literature reimagined for modern readers.