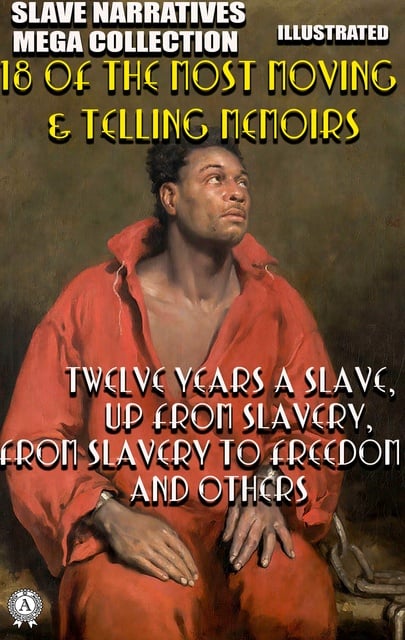 Slave Narratives Mega Collection. 18 of the Most Moving & Telling Memoirs. Illustrated: Twelve Years a Slave, Up From Slavery, From Slavery to Freedom and others

Slave Narratives Mega Collection. 18 of the Most Moving & Telling Memoirs. Illustrated: Twelve Years a Slave, Up From Slavery, From Slavery to Freedom and others

Slavery in the United States lasted more than two centuries. The adoption of the Thirteenth Amendment to the U. S. Constitution in December 1865 abolished slavery after the American Civil War.

The first slaves were forcibly removed from Africa by British slave traders beginning in the early 1600s.

Redoshi, later renamed Sally Smith, was the last surviving female slave brought to the U. S. from Africa. A Benoise war captive, she was illegally transported to the US (importing slaves having been outlawed 50 years prior). The last surviving male slave, Oluale Kossula (aka Cudjo Lewis), had been transported on the sale ship and was most likely part of the Yoruba people in Benin.

The quality of a slave's life depended completely on their master's will. It was considered normal, for example, for masters to rape their slaves, who were considered their property. Slaves who escaped were branded, killed, or punished severely in other ways.

Booker T. Washington Up From Slavery

Frederick Douglass From Slavery to Freedom

Harriet Ann Jacobs Incidents in the Life of a Slave Girl

Charles Ball Fifty Years in Chains Or, the Life of an American Slave

Thomas H. Jones Experience and Personal Narrative of Uncle Tom Jones; Who Was for Forty Years a Slave

William H. Robinson From Log Cabin to the Pulpit, or, Fifteen Years in Slavery

Elizabeth Keckley Behind the Scenes

Lucy A. Delaney From the Darkness Cometh the Light, or Struggles for Freedom